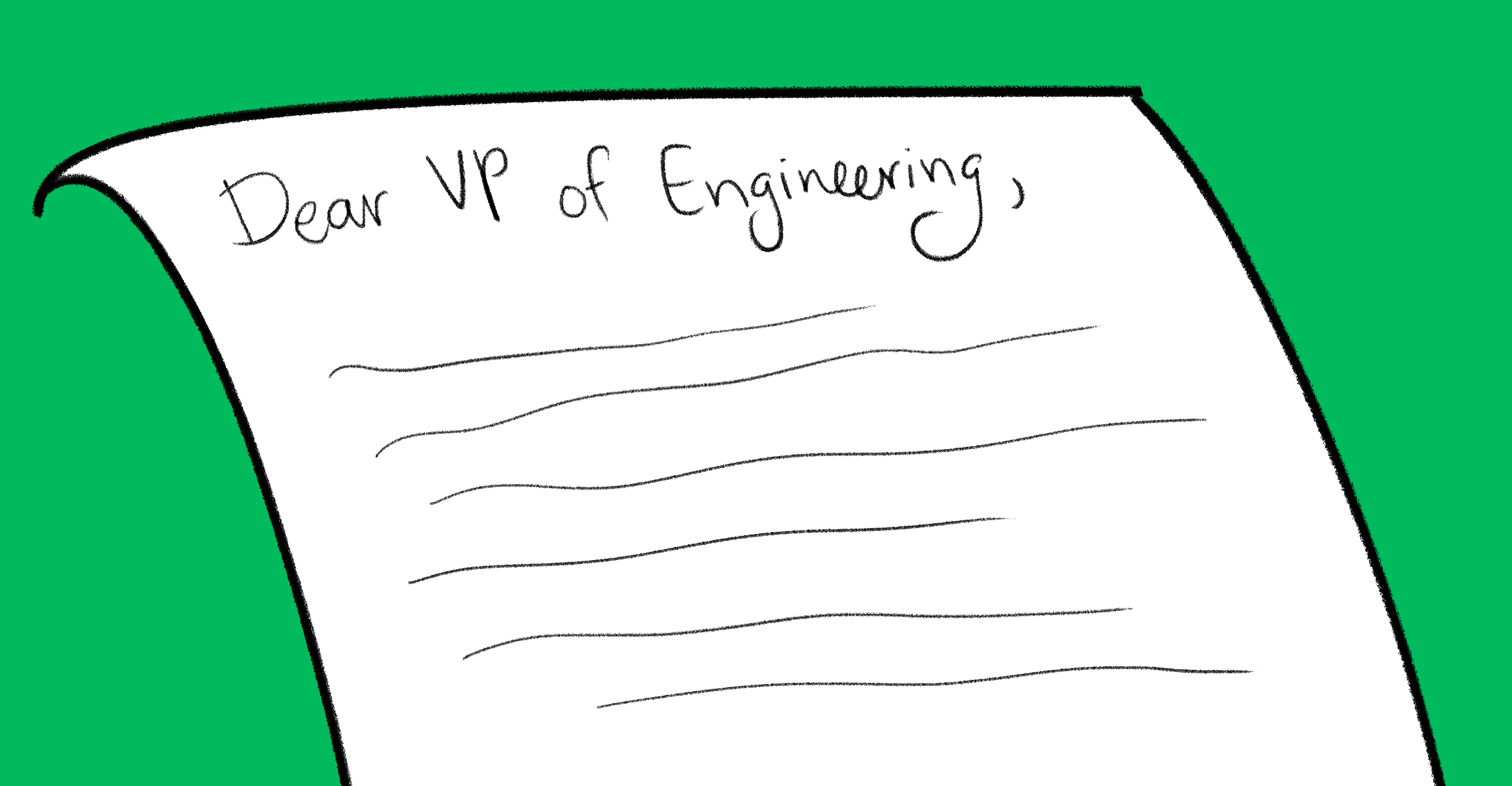 It’s me again… your Director of Talent Acquisition. Our conversations lately have been a bit tense, so I wanted to reach out and extend the proverbial olive branch. I think we can both agree that we’re struggling to find qualified candidates for our open development positions—that means features not shipped for you and positions not filled for me. Neither of us is winning with the status quo!

Let me start by saying this—we’re in this together and I’ve heard your concerns. The coding test that we tried injecting into the hiring process was unpopular with candidates. It only tested basic skills, and many of the candidates that passed the test weren’t able to perform on-the-job as well as we hoped. We made a few mis-hires as a result, which was painful for both of us.

We’ve since reverted to the homegrown coding project that your team built in-house. I agree that it’s done a better job of surfacing qualified candidates, but it’s also killing my ability to fill our hiring funnel with candidates. Even worse, manually reviewing each submission has become a huge time-suck for your team.

I understand that you don’t want to talk to any candidates until they’ve demonstrated a certain level of proficiency with writing code—that makes complete sense. But software developers are in high demand and asking them to complete a lengthy coding exercise at the beginning of the hiring process has all but dried up our applicant pool.

Talent acquisition is essentially a sales job—asking every applicant to complete a lengthy coding exercise at the outset of the recruiting process means that most often I don’t even have the opportunity to sell candidates on our company.

So where do we go from here? I have a few ideas that I wanted to run by you.

When we’re hiring junior developers, I’m OK with asking them to complete a coding test early in the hiring process. At this level I think it’s appropriate to ask the candidate to prove a certain level of coding proficiency, and an assessment gives good candidates the ability to showcase what they know and distance themselves from the pretender applicants.

What we can do this time around is use a coding test that leverages language specific testing frameworks rather than generic STDIN/STDOUT tests. Let’s time limit this initial test to 30 minutes, and it can be autoscored to save your team time. I think that by using a coding assessment that directly mimics our own code base, we can do a better job of surfacing junior level talent that understands the nuances of the programming languages and frameworks that our product is built in. And you can then use code playback tools to then quickly get a sense of each candidate’s thought process as they worked through the assessment.

Most of the more senior level developers that are applying for our open positions are coming in via referrals or have built substantial products in the past. Let’s not make them jump through hoops to prove that they can write code.

Instead, my team will interview and pre-screen senior level developers first. This way we can make sure they’re a cultural fit and also have the opportunity to sell them on our company, our product, and the culture you’ve built within the engineering team.

If a candidate makes it through my team and shows genuine excitement for the role, we can then ask them to complete a project based coding assessment reflective of the work you’d task them with once hired. Coding projects like this are actually a great opportunity to get candidates excited about contributing to our code base. We can send this exercise to candidates following their interview and ask them to spend 2-3 hours on it at the most. If they’re already excited about the opportunity and see validity in the assessment, I think we’ll see a lot more submissions from senior developers.

By going this route, every candidate that you talk to will already be sold on our company and should have completed a reasonably scoped and highly relevant coding assessment. We can rely initially on automated scoring of the assessment so that we know the candidate can do the work, allowing you to focus any time you spend with the candidate on the quality of their work and the other soft skills you’d expect too see in a senior developer.

For example, you can use a pair programming session to ask candidates more detailed questions about where they’re at with the assessment. What would they do next? How would they add an additional feature? What would their requirements gathering process look like? That sort of thing. I think this will give you a better sense of each candidate’s thought process, problem solving ability, and work style—we’ll already have evidence that these engineers are competent in writing code.

Please let me know your thoughts on reworking our hiring process with these ideas in mind. I’m very confident that we can be protective of your time while also opening up the top of the hiring funnel and giving my team the opportunity to sell developers on our company.

Coding assessments are an important touchpoint early in the hiring process and directly reflect our employer brand—let’s use them to create a strong first impression and build credibility with job candidates.

The team at Qualified.io offers a product that includes a library of pre-built assessments as well as the ability to build custom project based coding assessments. Qualified’s assessment methodology has been refined by millions of developers in the Codewars community to make it as relevant, useful, and efficient as possible.

The platform also supports code playback, pair programming sessions, and gives you the ability to manually add feedback or ask questions about any segment of submitted code. Developers can even complete assessments using their own development environment (IDE), so they’re working in a comfortable format that allows them to put their best foot forward. Qualified’s customers include companies like Apple, GE, Vimeo, and Andela so I thought it might be worth a look.

Thanks for hearing me out—I’m looking forward to working with you to create a better hiring process for this upcoming year. To shipping features and filling roles!

-Your Director of Talent Acquisition