Qualified provides the ability to configure test cases for advanced use cases. You can hide test cases from being shown to candidates on submit, tag tests with one or multiple labels, and weigh certain test cases as being more important to the overall challenge score.

Before we get into the specific types of advanced usages, let's first talk about the concept of test properties. Properties are used to configure individual tests blocks. These properties are defined by writing a special format to STDOUT. The format is <PROP::propName>propValue. When our platform interprets the program output it will detect these properties and apply them to the surrounding tests.

For example, in JavaScript you could write a property named foo with the value bar using:

When writing properties, the properties are attached to the most recent Test Case.

What is a Test Case?

Test cases are a group of one or more test assertions. Within the Qualified UI each test case shows up on its own line and indicates if it passed or failed. Different testing frameworks supported by Qualified, across different languages, will function differently - but they all output some concept of a test case. For behaviour driven frameworks such as RSpec, a test case is declared using it method calls, where as in a non-behaviour driven framework such as JUnit, a test case is defined using a @Test method.

How to properties get used?

Applying a property to an test case will mark the entire block with that property. If you wish to mark multiple test cases with the same property, you will need to repeatedly apply the property, once within each case.

When outputting properties, you will want to write them to STDOUT at the beginning of the test case for your chosen framework.

For example, in Java you would implement the foobar example like so:

So far we have used the traditional "foobar" to describe property usage. This is a contrived example, in the following sections we will dive into specific properties that are supported by the Qualified Platform.

When to Use Advanced Testing

In other words, advanced testing is to be used only by reviewers and for internal scoring. The advanced testing features outlined in this article will not be relevant from a candidate's point of view.

Hidden test cases are used when you want to test for cases that you do not wish to report back to the candidate. For example: Let's say you may have a number of edge cases that you want to test for, to see if a candidate typically writes defensive code. If you provide these tests in your test suite, the candidate will submit their code, see that they failed the edge case tests, and then proceed to fix them. You will not be able to fully determine if the candidate would normally have thought to write defensive code on their own since the test results gave the requirement away.

Hidden tests solve this problem by allowing you to include tests within the test suite that are not presented back to the candidate. From the candidate's perspective it is as if there are no edge case tests. The score that they are shown will also not reflect the edge case tests. From the reviewer's perspective these tests will be shown within the output and the score will reflect the entire suite of test cases.

To mark an Test Case as hidden, simply write <PROP::hidden>true to STDOUT.

For example, given the following JavaScript Mocha tests:

What the Candidate Sees:

When taking the challenge, the candidate would only see these tests once the solution is submitted. 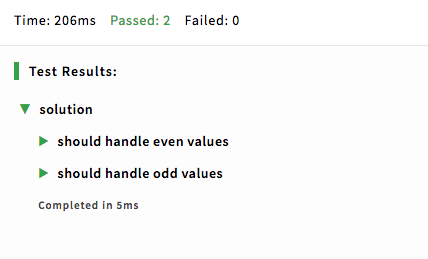 What the Reviewer Sees:

However when reviewing the results, reviewers will see these results within the results playback.

You are able to tag test cases with one or more tags, which will allow you to group results. This makes it easier from a high level overview to get an idea for how well a candidate did on a challenge, across different categories.

For example you may want to tag your test cases with "Easy", "Medium" and "Hard", or perhaps just "Basic" & "Advanced". You may also want to call out special categories, like "Optimization" or "Edge Cases". You may even want to use a combination of tags on each test case.

Tags do not affect overall scoring. They are a way to quickly identify which aspects of a challenge a solver has done well on and which they have not. A summary of each tag will be shown at the top of your results.

To tag a test case, simply write <PROP::tag>Tag Name to STDOUT. You can add any number of tags to a test case simply by using multiple lines, one line per tag.

The following demonstrates how to add multiple tags to multiple test cases using Python and UnitTest.

When you use weights, candidates will have no idea that certain tests are more important than others. From their perspective all tests will be weighted the same. Weights will also not affect the passed/failed count, even for reviewers. The only thing that will be affected is the internal score shown to members of your team.

The following example shows how to weigh a test case to be 1.5 times that of the other test case. For this example we are using C# and NUnit.